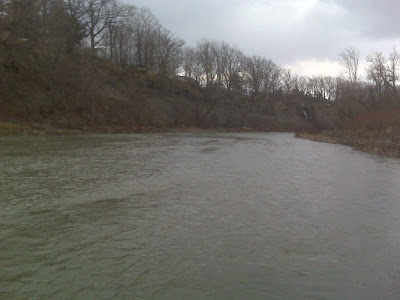 The creek was still receding this morning. She was a brown color today. I hate brown water. I have no confidence what so ever in fishing it.
Especially after the epic high water we had the other day.
I stopped yesterday and picked up 2 dozen egg sacks from the local bait shop as I was out of the good stuff. Dave said the he had talked to an old timer who lives on the creek and the latest water was the angriest he has seen it in 55 years. There was only one other time it came close he said.
I started out confident that i would pull at least one out this morning to end the year right. I drove down the street at first light with the waders already on with only one other vehicle parked at the lowest section by the lake. I rationalized in my head that this would be where the fresh fish would be. The dimebrights that came in as the water receded. Well they could have been there but I was up against Nestle's Quick not emerald green flows.
The temp was about 28 degrees this morning with gusts into the 30 mph range from the west. The high today was expected to be 34 degrees. This is tropical compared to tomorrow's predictions which are a high of 19 and a low of 10 degrees. This had to be the day.
Well I fruitlessly drifted the area from about 7:30am to 10:30am with sacks and pink worms. The water was crap and the wind was kicking my butt. The gusts were howling directly into my face and pushing my float to shore and back up stream.
I dealt with the conditions back shotting and bulk shotting to slow down my presentations with size 6 shot stacked in a set of 1,2,3, and 4 6's not including anchor shot then bulk shotting the load 15 inches from the bait.
The steelhead gods were just not with me this morning. At least that is what my gut was telling me. In addition to the wind that cut through my multiple fleeces and neoprene waders. I did not feel hardcore today. I thought more about my icing guides and the dirty flow then just accepting the circumstances and tuffing it out. So I called it quits short like a Nancy girl just after 3 hours.
After I dumped the equipment off at the domicile, I shot out for a coffee. As I drove past the gorge and looked at the water in the middle and upper stretches my mind kept telling me "well it looks a little more green down there...mmm...." What do i know? that could just be the reflection off the pine trees onto the water. I have a feeling I will be out this afternoon for a few hours to give it one more attempt. If I dont I will hear from someone or read the web that someone was out and slaying them somewhere else on the creek . Maybe The right call would have been to fish the smaller streams in Chautauqua county? Oh well back to the coffee...............................
Posted by 18 Mile at 11:30 AM