The Oak At Low Flow 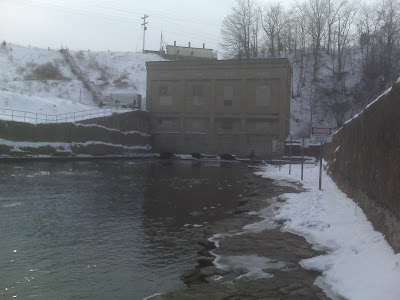 Friday I took the show on the road to the Oak. The weather temps were in the mid to high 30’s and I was hoping for a little mid winter action to warm my increasingly frustrated soul. This cold snap has played with my head and made a little more morose and jittery than usual. The streams have been locked up on the Southside and I find my self pacing through the house a lot with the hamster wheel in the head working overtime. My friends say I need a good night out with a mild level of inebriation to break me out of the doldrums. Today it is 11 degrees and it does not even faze me as being cold this morning. I guess the blood is thickening up.
Pretty soon I will have a dog team and eat whale blubber…………….


Anyhow we did have a mini-heat wave yesterday on the Oak. I navigated through the countless back country roads from Pembroke and through the Iroquois National Wildlife Refuge to my appointed destination. I was excited only to see 5 cars in the parking lot on this warm day with hopes of not only the possibility of fish but light pressure too. I walked down the hill and across the dam to the other side and noticed the majority of the people that owned those cars were planted at the dam. Spinners, Pinners, and fly guys alike lined up side by side on each side of the out flow. There were may be 12 guys total at that location.

I decided to walk my way down the path to the point where the two creeks come together. This was a place where Big Ed and I used to have quite a lot of success back in the day. Back when we almost exclusively fished the Lake Ontario tribs. I noticed there was no one in sight other than my friend the Great Blue Heron. I thought hopefully that one of us would have success today catching a fish. While I was filled with excitement with the lack of pressure that I found; I was filled with disappointment in regard to the water levels. There was current coming from the dam but the water was very low and crystal clear. This day would be tough sledding and my only enjoyment might come from the relatively warm weather. I fished the junction area and sycamore run area and worked my way down to the Archery pool. There were no fish to be found in that area caught or sighted.

The Archery pool was in better shape than the previous areas but I caught nothing. I put my time in there as I figured this was the best water I was going to find. I tried a number of presentations to no avail. Long after I thoroughly sifted through every inch of the pool, Two fly guys splashed their way upstream to the hole and one of the guys planted himself about 5 yards below me on the opposite side of the stream. He informed me that a guy dragged two fish up from the Honey hole down stream as he started to cast in my drift. His friend was working his way up to the sycamore run when he asked his buddy where you are going. When his friend told him he was going upstream so he would have to fish in front me and screw up my drift; the other guy told him don’t worry about he can alternate casts with you. Thanks buddy I thought. Well Fly guy number two declined and went to the sycamore to fish. I became a little ornery and decided to walk back up toward the dam. I worked the shallow run areas on the way to the dam and managed to catch a male brown trout. The fish took a tiny power bait maggot and he was sitting behind a downed tree that lay across the stream. As I worked the fish closed the bank it popped off the hook. Oh well I sad to my self as least I caught one fish.

Slowly I made it back to the dam and there were only two guys working the outflow so I fished it for the last hour of my trip before I left. I had no luck there but did see one steelhead porpoise to the surface before returning to the dark water at the base of the dam. 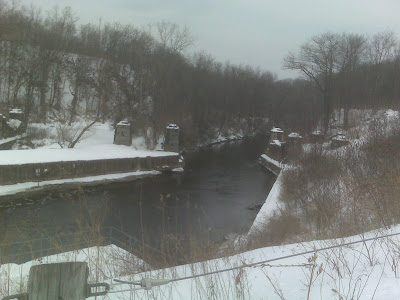 That was it folks, a one fish day in the middle of January. From what I heard from most of the other guys that was one fish more than most.
This trib is always feast or famine for me. When it is on you are going to get into them but when it is off it is horrible and a waste of a drive.
As my friend put it on a call on the way home; Joe at least you were out there doing God’s work in the fresh air. I ended the call put his words into the proper context and made my way home.
Posted by 18 Mile at 11:21 AM