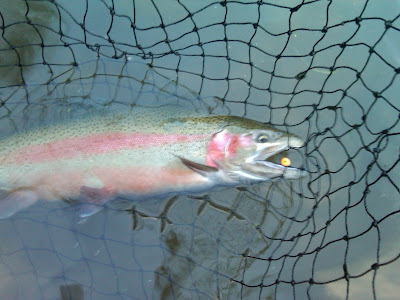 This morning I decided to go try a Lake Ontario trib which is infamous in the minds of many. I was hoping for a female chinook to replenish my roe supplies but for the second time this year I couldn't buy a female Chinook.
The people were not that bad today and for the most part everyone was friendly and had manners.
I fished a combination of roe and beads today with some success but not a blockbuster day.
I did get the Lake Ontario Grand Slam today and I should be happy about that.
The slam included a Chinook,Brown,Steelhead, and an Atlantic.
I stayed from sun up to sun down . The one year old waders are leaking in both footies and I'm not happy about that. So the waders are turned inside out drying out and I plan on kicking back on the couch tonight. I wish I had Bill's fountain of youth and super powers to get me through a long day.
Until later....................
Posted by 18 Mile at 8:38 PM