Way up a creek without a paddle 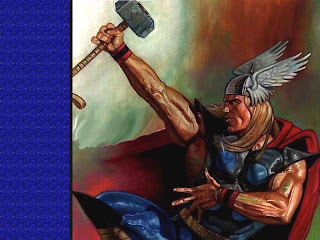 Well the steelhead jones was calling me this morning. The weather dude called for AM showers followed by afternoon thunder and rain. The weather was cloudy with a slight sprinkle when I hit the water.
I love fishing in a  rain shower and I love it even more when I get to a few spots on the flow with no evidence of other human beings.

I fished some fast water and I heard what I thought was thunder but I couldn't tell if it was the water playing tricks on me or the construction up the road. So I continued to hike up stream in search of good water. About a mile upstream from where I started I could hear the distinct sound of thunder rumbling in the distance. The sky darkened and  the rumble sounded as if it was coming my way.

Well I went into risk management mode and started calculating my odds.

There are three methods of dealing with risk.

Well I sure as hell decided to avoid that risk before Thor, the son of Odin, transfered 100 million volts of labotomizing go juice through my 13 foot IMX. I double timed it back down stream somewhere between a fast walk and a slow sprint over gravel,rock, and boulder. In addition to two wades across the flow.

I got back to my truck huffing, and puffing with lungs burning. I was a puddle of wader soup and shower drenched from my hump back to safety.

By the time I got out of the waders and slugged down a bottle of water the thunder claps dissipated. I contemplated throwing the gear back on doing it all over again but I thought better of it.

I stopped at the Timmy Ho's for breakfast and made my way down to Ja-Wens Tackle to shoot the shit with Dan and  blow $40.00 bucks of stuff I don't need.