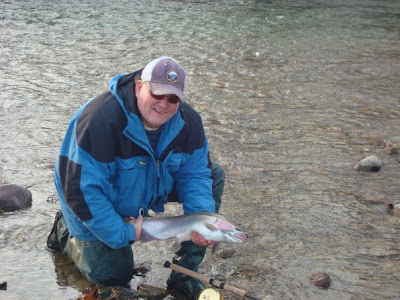 Well Big Ed is the man that I cut my steelheading teeth with back when we were snot nosed kids in our late teens and early twenties.
Not only did we start out steelheading together but we started our fly fishing and our pinning careers simultaneously.

I can tell you that he was one of the best people you would ever want to know and a frustratingly good fisherman. We have lost touch over the years but we both found ourselves without employment last fall. Luckily for both he and his family he is back in the working world and that is one last person I have to worry about.

Well do to our time “off’ we had the opportunity to fish together and it was one of those strange feelings in life one gets. Our ride to Chautauqua County felt like we were separated for only a couple of days. He honestly has to be one of the funniest people I know. He can make me laugh even when he is not trying. From the way he rips on people to our hike that fall day to our spot. On our fall fishing reunion tour we fished a favorite small stream of ours and found some peace and quiet away from the competition. Of course I had the smell of the skunk on me that day and was left with my feeble attempts at convincing him that I was honestly still a really good fisherman. I busted out my tales of past success on the Catt and 18 from just a few days earlier. He of course had the look on his face saying “yeah right dude… whatever...” 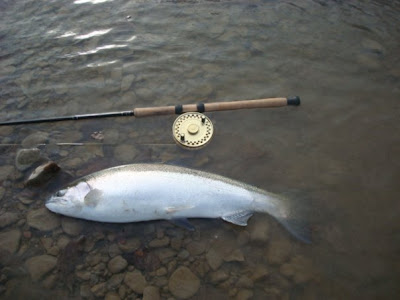 Of course the tool bag busted out his 27 packs of pinks worms and the mf’er went to town on the stream. I honestly just sat on the bank watching him. He just has that gift. He has had the gift since we were kids to smell fish out and catch them when no one else does. I was just laughing to myself watching this guy who is built like a brick shit house slay the fish in his hip waders. Yep that’s right hip waders. As he would say “I can’t wear chest waders dude. I overheat. I have a big furnace.” His furnace burns so hot that after he schooled me he told me to hop in a spot while he took a break. As I was focused on my drift I herd the distinct sound of the opening of an aluminum beer can. My head spun around and I found the POS SOB drinking a Bud. I also found out he brought a 6’er in his back pack.

As he noticed the shocked look on my face he commented “What Dude? I’m married and I have 2 kids and a new born, I gotta have a few when I can. I don’t get out much any more!” At this point I just started laughing. Watching this guy put them down in his Sabres hat and by the way a matching blue Sabres fishing jacket. All he needed was an “I want Tim Connolly’s wiener T-shirt” underneath his jacket! 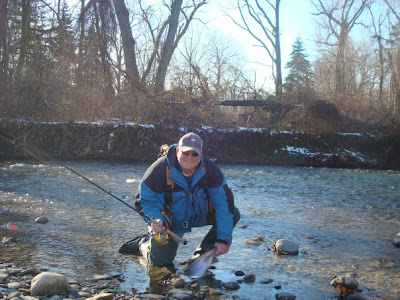 My head recalled all the old trips fishing together especially at Burt and Oak. Recalling how we used to slay the browns with our Oregon cheese egg flies and all our Sage and Orvis bullshit.
I remember us taking one trip to Burt in late November or early December in his pimped out used silver Cadillac during an ice storm. There were cars all over the road that morning but some how we got there.
The hill at Burt that we had to descend was a sheet of ice and we just sat on our asses and slid down the hill in a fury using our corkers as brakes. We got into some fish that day as I remember. A few spawned out browns, a couple of steelies, and a lot of red blushed Coho’s. Luckily the weather warmed up later in the day to get back up the hill. 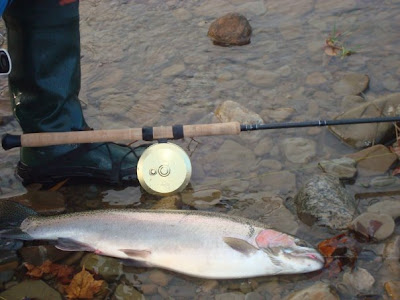 I can also remember fishing Oak with him when our stream was assaulted by those alien POS Canadians with that strange and unknown pinning technology. Boy did we hate those SOB’s who were out fishing us by a minimum of a 5 to 1 ratio. They were also chumming which pissed us off even more. Yep we were some of those guys who called them cheaters, harvesters, and A-holes among other profanity laced statements with righteous indignation.
The indignation that was natural to us self proclaimed superior fly fisherman.

Well our little fits of anger, jealousy, and pompous superiority lasted only a few months before we jumped to the dark side. In that few months we found ourselves rigging up with Islander Pacific steelheader reels and St. Croix wild river rods. We would ask and receive some kindly given lessons from some Canadian Master pinners that we encountered on the streams. And then that was the end of it for both us we were done like dinner and pinning was the only way to go.

I can go on and on with stories but if you are out there Big Ed thanks for the memories on the Burt, Oak, and the Salmon River. Dude lets get out and a put a beating on the steel sometime.

Well back to the coffee……… 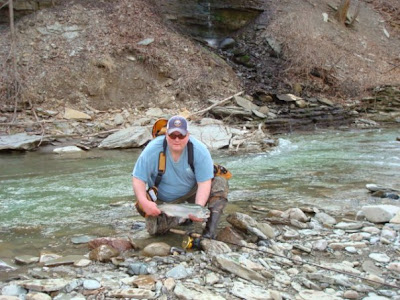