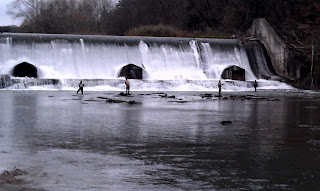 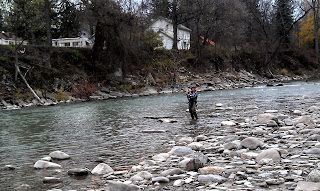 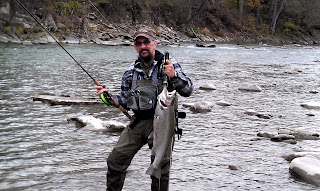 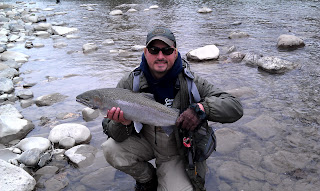 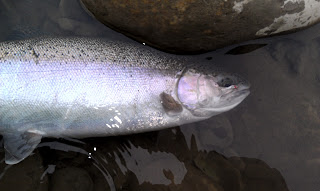 This morning I attempted to cleanse myself of the putrid smell of the skunk by Scobifying my soul.
I headed up the system to where it began for me many years ago. I hit the dam at first light and there luckily was light pressure to deal with. Mostly bottom bouncing lead chuckers right at the base of the dam. They got a few fish from what I could see. I concentrated on the tailouts to no avail but it was nice to be there. This was one of the spots that Big Ed and his dad would fish with me back in the day.

From there I checked out the "Ham". The water was nice but my spider senses told me to blow it off and move down stream. I ended up in G Town by the school. There wasn't much pressure today and as I walked up from the truck I noticed Skiv occupying a run. In the first few minutes that I was there he started banging a few fish. The fish were full of piss and vinegar and gave both of us our money's worth.

While I was fishing below Skiv, he asked me if I wanted to share the run with him. I graciously declined and told him a man should never take another man's lucky spot while its hot :).

I then asked him if he minded if I took the fast water above him. He told me no problem and I proceeded to wade out knee high in the  fast current. I threw on a pink worm; bulk shotted the line and gave it a whirl.  My skuniness was washed away as I watched my float disappear under the gurgling and bubbling current. The fish fought hard and added a few leaps into their repertoire.