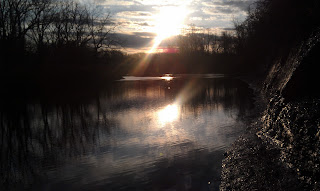 Yesterday was tough  going on the tribs. I put in the miles and was skunked out. The sport I love has been feeling  more like work lately and making me a weary SOB. I would say that this season the fish have been spread out and it is definitely not a lazy man's game this year.

I started off working a creek mouth with jigs looking for freshies being pushed in from the wind. Once the wind made it too difficult to get a good drift, I more on with the smell of skunk still upon me.

I made my way down the road and BING,BANG,BONG it was on like Donkey Kong. After telling big Ed the night before that I was selling all my equipment and recounting my conspiracy theories about the fishery; my optimism was restored. First three drifts and three fish and a relatively productive day began.

A few other pinners joined me some with permission after kindly asking  and some who made themselves comfortable as if I was personally holding the pool for them.  I ran into Mike Crehan who was one of only a handful of Americans I would see fishing a pin some twenty years ago when I got into the game. We had a good chat and caught  fish from a pod moving through. He is definitely a classy guy.

Sorry no pictures of the fish today. I left my cell in the truck charging on my drive to new water and I was not about to go back and get it while the fish were hot and hungry.