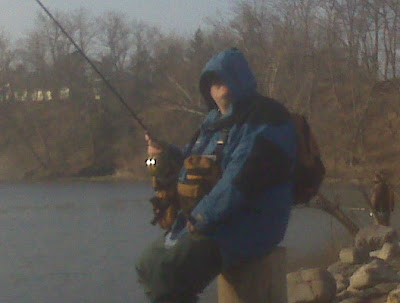 Today was a skunker of a day for Big Ed and I. I got to the access point at about 6:15am to find about 8 to 10 cars there already. Big Ed called at 6:30 am to tell me he was going to be late and to start with out him.
The big guy is getting his butt kicked by bronchittis and should have not been out. He has been cooped up and needed to get out and atleast give it a shot. He was struggling to breathe and was tiring fast.
We were fishing the estruary today and the temperrature variance from the access point to the lake felt like a 15 to 20 degree difference. No doubt due to the shitty East-North East wind blowing in over the the ice pack. The wind was blowing upstream against the slow current. We had to deal with arching bows in our slack line to this fact and it wasnt fun. I had a few light hits but couldnt connect. There were a few pinners sitting on as call it the spot on the spot and they got into some skippers but the other 6 or 7 guys in the vicinity were shut out. And Im talking the regulars who are out and about every day with me.
The only highlight was a pissed off beaver marking his teritory slapping his tail in a 30 yard radius around and between the floats. Of course everyone did thier best to stay away from Bucky as he slapped his tail with ferocity.
After 3 hours we thought it in are best interest to call quits and fished our way back to the access with no luck. There were a few humps under the access bridge that had fish on a stringer. No doubt to put in thier freezers with the other 55 steelhead they have caught over the season. Billy Bob loves the smoker you see and probably would smoke the beaver if he could.
We kicked around going up to Chautauqua county in the smaller streams but neither of us like fishing to fish on thier redds or fish sitting in 6 inches of water in tail outs.
Tomorrow's forecast is as follows:
South East winds 10 to 20 miles an hour with a 100% chance of rain and a slight chance of thunderstorms. I am supposed to be out tomorrow with Commander Tom but we will have to monitor the conditions so we are not playing in a mud fest.
Now onto the dream interpretation and junior psychology. All week I have been having the same dream. I am sleeping on my back and breathing heavily through my mouth. As I breath in and out a long piece of florocarbon is lowered toward my mouth with a bare size 12 gold egg hook on it. I take a deep breath and suck it in. The hook gets lodged in the roof of my mouth and I start choking... Then I wake up. I dont know what that means but that is F'd.
In addition last night I have a dream. I fall asleep on the couch which I did and in my half sleep I open my eyes to see a large hawk sitting on the top of the couch watching over me. I thought it was so real I jump up and adreniline shot through my body. Maybe too much time on the water Eh?
A possbile spirit creature as the Native North Americans say?
This what I found:
A Hawk In Native American mythology, the hawk is the messenger. Therefore, if the hawk seems to be friendly, an important and probably positive message will come your way. Other symbols in the dream can reveal what that message concerns. Hawk can also indicate an important opportunity coming your way. If the hawk seems forbidding, however, this is a warning to take care of your emotional baggage before seizing whatever new opportunity comes your way.
I will let you know how it tomorrow turns out.......
Posted by 18 Mile at 5:34 PM