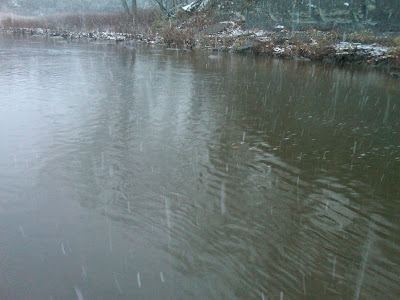 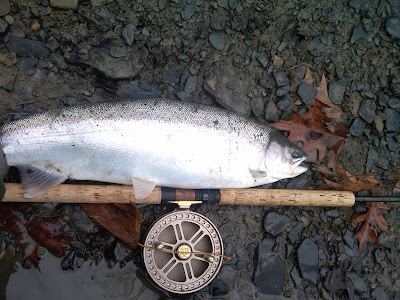 I took a solo run in the darkness of early morning. The air was crisp and there was a light dusting of snow on the ground that added to this November Sunday. There was no wind just cold.

So as I walked down the path into the darkness , my hot breath held in the air like a small fog in the light of the head lamp as I huffed and puffed like an old steam engine. 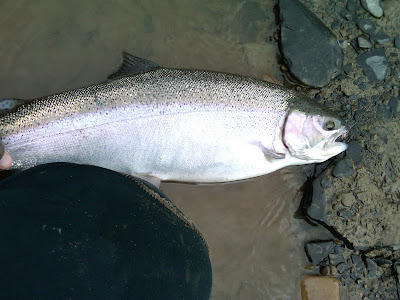 I chugged, waded and stumbled my way to the run I wanted to hit at first light. As the light came up, the snow started to come down steadily and mixed itself with a little freezing rain.


My presentation was perfect and I was overly confident about the morning. Well my first two spots did not produce and the only thing I caught was myself as I some how hooked the back of my jacket as I fumbled through my vest. WTF!!! 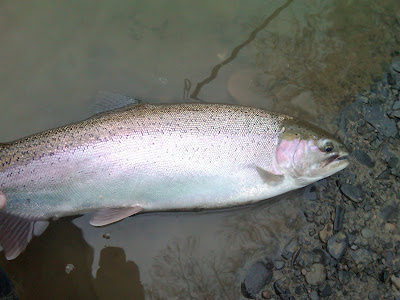 At spot number two I filled myself with second guessing/ I questioned my bait, my hook size, my floro lengths, the poor runs of the early season etc...

As I was lost in thought I heard an ungodly sound of breaking bushes ,branches and grunting. Twenty yards below me three does and two bucks came charging across the creek and made way back into the brush. In fast pursuit behind them were two bigger bucks trying to chase down the pack. I refocused myself on the water for a few minutes until the herd of deer came flying down the path just off the bank plowing over everything in site. Then about 20 seconds behind them came the two big bucks separately. One of them did not even notice me and came within 15 feet of me. He looked at me and froze as I kept still as I looked at him. hHe then just started grunting and tore ass down the path toward the herd. At that point, I said to my self,well there probably will be no fish today but to see those deer was worth the price of admission.

I worked my way up stream as the morning went on and struck gold in a few spots. This season has been all about the fish being spread out far and wide. To get your fish you were walking a lot and hitting many spots. But today I lucked into a pod or two. Today's fish were mixed in size but it appeared finally some bigger fish were mixed in the pods finally.
A good morning to wash Saturday's skunk off my mind.
Until later...................
Posted by 18 Mile at 12:11 PM