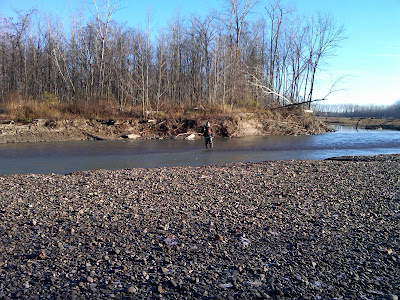 Today I had another opportunity to take a day off and sneak away to meet Bill, Frank, and Gabe. We met up at sun up with the temps in the 30's and the water temperatures hovering around 39 degrees. Frank caught a few and I had one that came unbuttoned on a size 10 hook but I guess that's part of the game.

After putting our time in at one stretch of the river, we moved on to the next area which was populated by a number of fisherman. We decided to put our time in and explore a little outside of our usual spots. 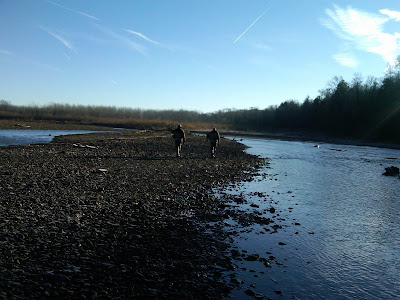 So as the gang comfortably started the death march in their breathable waders, I tagged and lagged along in my back up neoprene's feeling restricted, constricted, and wobbling down the stream like a humpty dumpty like stuffed sausage. The Orvis waders are still in for repair. I was told two weeks and this Sunday it will be my three week anniversary of their non-return for repair. 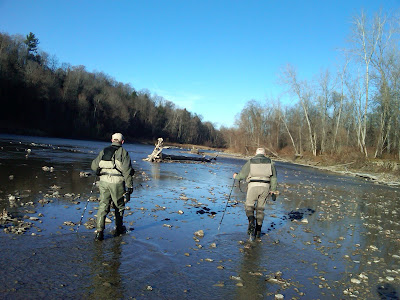 So of course Bill and Frank took the lead. Older , wiser , and definitely in better shape than most men their age and men half their age; we went on a search for our special fish. The pickings were slim today with temps expected to hit 62 by noon and blue bird baby blue skies.
I hate sunny blue skies while I fish. If it was my choice everyday on the water would be cloudy,dark,drizzly
and in the mid 40's but a day on the water with special friends is exactly that....special. 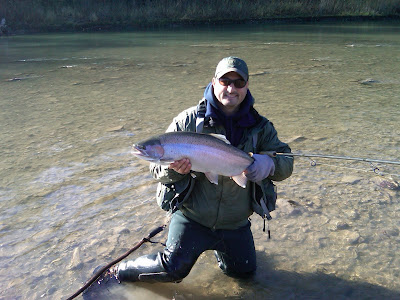 I did luck into one nice fish on our walk back up that made my day and gave me some fodder for the blog.
Bill hooked into a few brutes and lost them on his extended journey too. We all hoofed back to the trucks for a little lunch at which time I surrendered to the neoprene fueled heat stroke and and aching muscles and left the guys before they tried one more spot.

My old bones weren't coming back into form until about 8pm after a few Molson's to end the day at a local watering hole.
As Bill puts it: "it is always good to meet up on the water and keep up our friendship/torture/fraternity" and it is always good to see Frank aka the Premier ply his trade so well on the water. And for Gabe who ended the day a little frustrated and lamenting his performance in front of the old guys. We have all put our time in on that river learning not only from our successes but also from our fishless skunked out days too. You will have your glory days on that water trust me.
Until later.................
Posted by 18 Mile at 9:39 PM