No fish today and just kicked up the feet...... 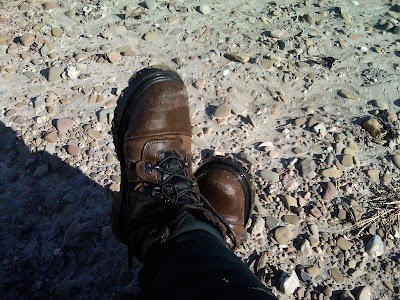 Today I fished alone and concentrated on the lower sections. I was looking for stacking or staging fish ready to make their run upstream.
After a cold morning it warmed up nicely and I was afflicted by the blue bird skies once again. It felt like picnic weather not steelheading weather.
The water had dropped quite a bit and is starting to clear. More rain is needed to get things going again.
I wasn't feeling the the Mojo down stream and Big Ed said nothing was going on upstream so I reverted to a common theme for me lately. I lounged on big log and stared at the sky just listening to the water. I thought of a conversation I had yesterday with Bill and Frank about a fly guy named Jim who is still at it almost everyday and is into his 80th decade on this earth. Bill commented that he hopes he is still that healthy to walk the stream like a young man when he hits his 80's and I agreed with him too.
I also thought to myself that when my time comes hopefully when I am walking this very water and in my eighties that this is where I want to die. Peaceful on a bank in the domain of the steel. It would be almost as good as a viking funeral.
Until later...................
Posted by 18 Mile at 11:48 AM