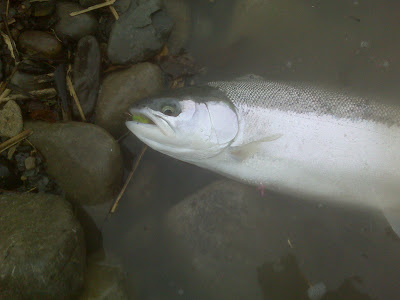 I started off this morning at first light in the lower section of the creek. As I was marching down the bank with headlamp on I heard a thunderous slap on the water about four feet away from me. I shined the light upon the water and saw a beaver swimming around. No doubt he was finishing up his nocturnal engineering missions.
I continued my walk on the side of the bank and I noticed in about 8 inches of water a larger fresh female with a giant lamprey wound just behind her gill plate. she slowly swam away with the vibration of my waders in the skinny water and I wondered if she was going to heal up. I hate those snakie bastards. they creep me out.
I reached my fishing hole at first light and noticed there was no one else there. The wind was blowing pretty good but the air was warm over night and into the first part of morning. With glee I waded in to the green water and with a little too much enthusiasm started my pull cast.
The result was a bird nest. After swearing in Italian a few times and giving up on untangling the mess; I decided to re-rig everything. I patiently and yet efficiently started the project as I could hear fishing boiling and jumping around. Frustrating !!!!!!
Well I took care of that mess and started to fish. The fishing in my estimation was off today.
I don't know what it was but is was. The warm air turned cold and I could hear thunder in the distance . The thunder got closer and closer and there were a few flashes of lightning. I decided to put the 13 foot rod down for while until the weather passed. I did not want to get zapped as result of tempting the gods.
The lightning stopped and then we were graced with rain and hail briefly and the winds settled for a while.
The fishing picked up marginally for about an hour and I witnessed three steelhead caught and one small mouth bass. I caught the above fish on a charteuse egg sack. She was skinny and long for her size but she gave me a great fight. She made 2 nice spirited runs before she made it to the bank. She was silver, fresh and flawless and that ended my success for the day.
I tried one other spot with no luck and decided to call it a morning. I hope to give another shot tomorrow hopefully with a little more luck than today.
Posted by 18 Mile at 5:11 PM