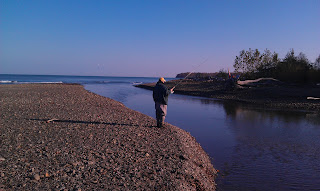 The Commander doing his thing. 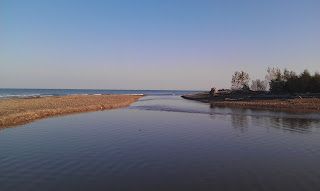 Straight from the lake. 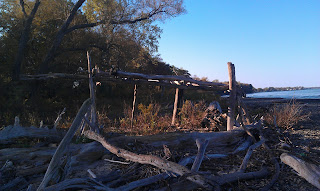 A sacrificial altar to the steelhead gods. 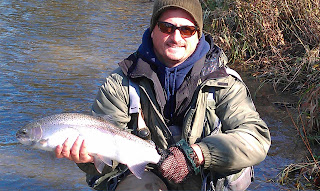 Well yesterday was a morning affair at the Dirty B with about 160 of my closest friends. I got there at first light and secured my spot. the water was up and brown but fished pretty well. I hooked into some browns and a Chinook. At 10 am things died down and I had enough of the people.

The older I get the more I am motivated to do what ever it takes to put some distance between me and my steelhead competitors. But considering my water was high and unfishable I didn't have many options.

This morning after  saying a few prayers to the steelhead gods and asking for some green water, the commander and I did some small trib fishing hoping for some fresh silver fish to get into.

The first trib which I scouted late yesterday afternoon dropped and cleared significantly. We fished first light there and the Commander had a fresh one on on a pinkie but that was it. The were no other signs of life on this stretch just more fisherman showing up every ten minutes.

We went to our other planned locations  but they were occupied already so we kept heading down the milk run. We finally found a quiet stretch with some fresh fish around who had a penchant for head shakes ,head flips, and escapes off the line.

As the day went on the warm sun made the morning a pleasant experience.

Now Commander put all those new jigs to use!!!