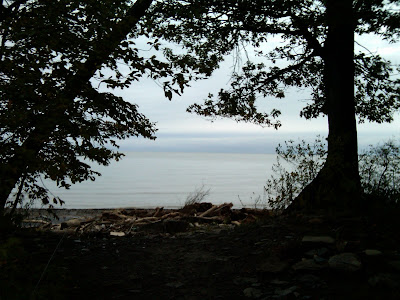 I begrudgingly got out yesterday morning with Bill and Frank. My body has been sore and aching lately.
I do not know if it is the hikes on the water or the latest bubonic plague to be passed around but the body is sore.
After fighting all night in my head, I decided to not cancel.
Bill and Frank stumbled up my dark driveway with flashlight in hand and enter my little steelhead hovel.
The other day I lost the ceramic insert on my Fuji guide tip. Bill was gracious enough to take the time to stop at http://www.jccustomtackle.com/ to pick up a couple of guides.
I had dozed off and didn't clean up too much so they entered a house with fishing tackle strewn every where, waders hanging over a chair, wading boots drying up side down on an old radiator, and empty boxes from Orvis and FISHUSA spread across the dining room table. To say I need a maid would be an understatement.
We hit the water and things were surprisingly slow at first. The temps were in the low 40's with a periodic slight drizzle upon the green and dropping water. Bill and Frank after a while decided to walk down stream and I decided to be stationary due to my aching bones.
After they went on their way I stumbled into a skipper on a jig. The boys on the other hand did better. Well shall I say Bill did all right but Frank was on fire.
On fire like habanero pineapple sauce.(INSIDE JOKE)
Frank evidently skillfully hit the right honey hole at the right time and had his way with a pod of fish. When they made their way back to me and gave me the report my jaw dropped. But good on him. If you put in your time you deserve the fruits of your labor.
We then decided to try another spot on the river. The boys went north and I walked south.
As walked up to my appointed spot it was inhabited by to fisherman so I decided to turn around and work chutes and pockets. The little nondescript type of spots that the majority of fisherman walk by but often hold fish in transition making their way up river. I had a few head shakes but my dull hooks or slow reflexes did not sting them enough for a solid hook set. I'm betting on the slow reflexes.
Bill and Frank at the end of our outing met back up with me to inform me Bill got a few more and Premier Frank got a few more also. Congrats to his Premiership.
Until later........
Posted by 18 Mile at 9:17 AM