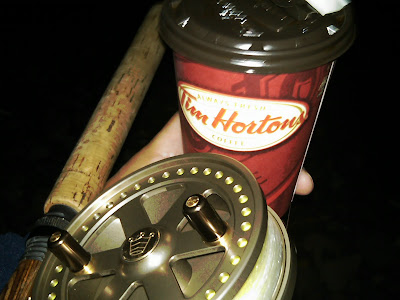 The day started before daylight with a little liquid crack to alert the senses for my days outing. I slowly walked into the darkness sipping the coffee as my head lamp guided me down the path.
I spent about ten to fifteen minutes waiting for the sun to rise. I took in the welcoming smell of the Timmy Ho's mixing with the damp leafs on the bank. Yes, when I finished my java jolt I washed out the cup and crushed it for safe keeping in my pocket.
What you take in, be sure you take out. 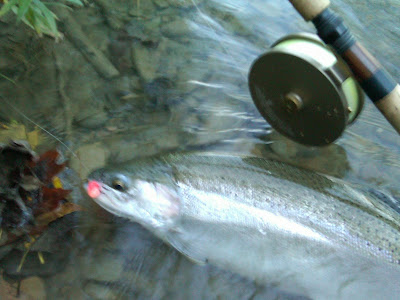 As daylight rose, the muddy plan A trib from yesterday had a good flow today. she was clear in the shallows but a light mint green in the small pools. I knew she would start dropping fast and I would have to make quick work of her.

My first spot appeared to be promising as fish were rolling at first light but there were no takers for my offerings. I moved up stream to another run and instantly on the first drift the float went down.
The fish were fresh this morning and feisty. They were eager takers. 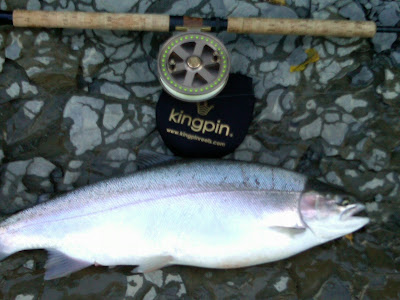 As the day went on I marched to the lake hitting every run and pool. there were some welcome changes in the area of stream from a scouting trip a month before.

The number of fisherman picked up and I worked my way to a current break about 100 yards from the lake .

It was here I got into a few more fish that when hooked decided to make their way back to the lake screaming down stream and giving me a work out. 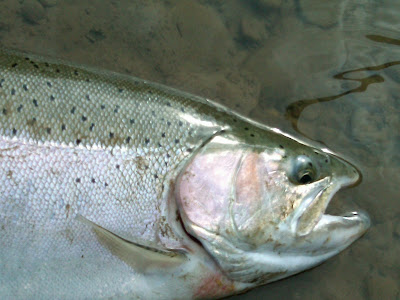 It was here I ran into the father son team of Mike and Mike from New Jersey. Mike junior was a very nice guy and relayed an incident just up stream. Two younger fisherman verbally accosted them with vulgarity and telling them to go back to Jersey and stay off their stream.
These gentleman were not the stereotypical bad egg out of towners that bully and crowd your holes etc.
These were guys staying to themselves and not bothering anyone.
I felt bad for Mike and Mike so I gave them a few tips and gave them the heads up on the water conditions on a few of the tribs. Early in the week they had fished Pennsylvania tribs and were working their way through New York.
Mike junior had two months off from work and he was turning himself into a steelhead nomad following the runs. He was pondering his next move which may turn out to be Michigan.
I left the gentleman and headed to another trib to check conditions as the plan A trib had dropped to clear conditions over the first part of the day.
The next trib was muddy so I kept moving on.
The third trib of the day was a nice pay off. It was dropping and slowly turning from brown to green. Timing is everything in life and this was no exception.
Hitting fish when the water is on the drop is a beautiful thing.
The fish were silver,fresh, and furious. 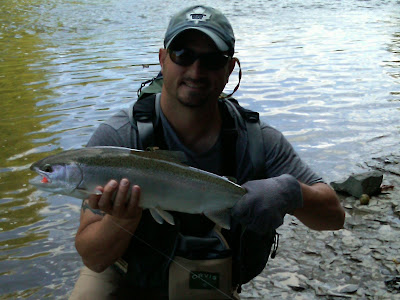 It turned out to be one of those reaffirming days. After yesterday's discouragement, it was heartening to have your hard work and efforts pay off in a big way.
I didn't get off the water until 6pm and made hay while the sun shined as tomorrow's weather is forecasted to bring high winds, rain, and thunderstorms.
But for today, life is good and I feel like a new man.
Until tomorrow..........
Posted by 18 Mile at 7:07 PM