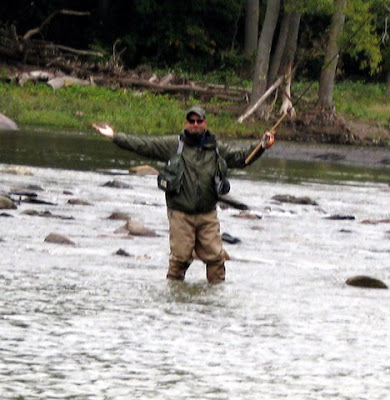 This morning I rolled off the couch at 5am. I woke up for bit, threw on the waders, and drove down the street to meet Bill at the access point. After the muddy and off colored conditions the last few days I was hoping we would catch the water on the drop and catch a few fish.
The water was more green than brown and things were setting up well.
We started on our walk and fished a spot with no luck but there were fish around. On our way down stream, Bill aka Mr. Mountaineer took a brief spill navigating some boulders in 2 feet of water. 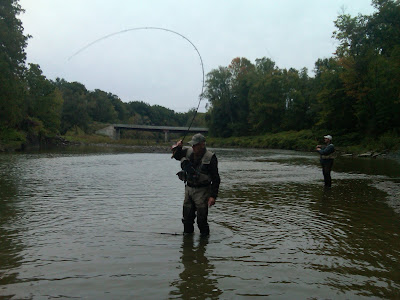 Like any good fisherman Bill sacrificed his forearm and knee to save the rod and reel. No worse for the wear Bill moved downstream with only a wet arm and a shocked look on my face for his troubles.
Bill is a former fireman and will give any man 20 years his junior a run for their money. A man who walks up 3 foot banks and wades across 4 ft boulder strewn runs without blinking an eye. It usually is me playing the part of the dancing bear slipping on rocks or shale.
Well I guess his unexpected baptism was good luck because a few minutes later we set up and Bill got into a few fish. Fish will always make you forget about wet sleeves or broken rods.....mmmm.... well I will leave that 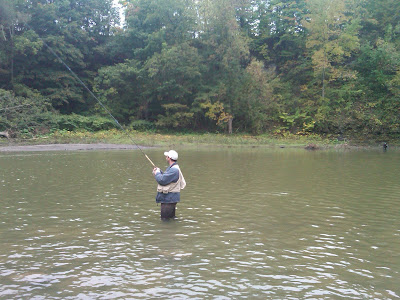 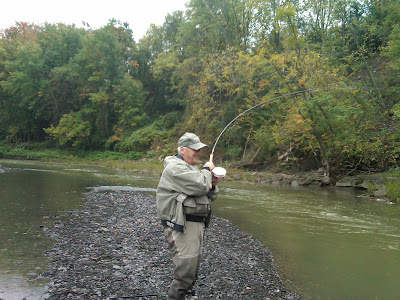 for later.
We met up with a friend of Bill's, Craig from Cambridge and the three of us spent a few hours sharing some water . Craig was a friendly guy and a pleasure to fish with.
After leaving that area we moved up river. Bill caught a few. I caught one which decided to release herself when she got close to me and Craig had a few.
Now back to the mmmmm..... this is where Bill while fighting a fish on his IMX hears the ugly sound of his rod snapping. He reeled in what he could and hand lined the fish to shore for release.

God what horrible sight. Well they say adversity builds character or something like that. To remedy this unfortunate situation , Bill and I hopped in his truck and drove down the street to my domicile to pick up a spare rod I had laying around. We got back to the creek and re-rigged and went back to work.
We took a little walk to find some untouched water and Bill got into few in some rock filled runs that the fish were using as a transition area.

By noon the rain started at a steady pace and we decided to call it a day. I would hazard to think that if the rain keeps up the creeks may be muddy again for Saturday.
Bill is cursed with a generous soul. As he is aware of my desire to purchase a Kingpin sometime in the near future; He surprised me with a reel form his collection to use as a loaner. Now I have an opportunity to feel the difference first hand in comparison to my old warhorse.
Bill thank you for your thoughtfulness and Craig a pleasure to meet you.
Until tomorrow................. 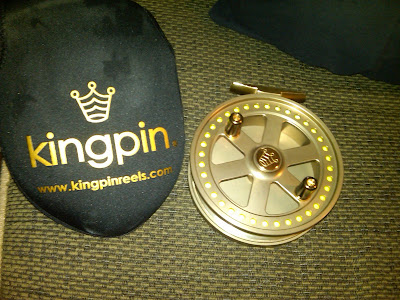