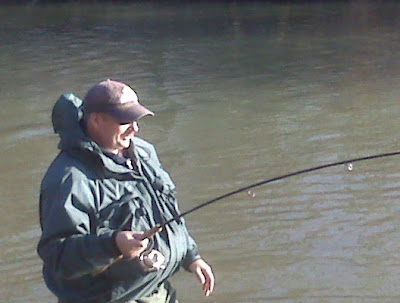 I don't know if it was the cold north wind, the dropping clear water conditions, or the bright sunshine but today was an off day. I was supposed to get picked in the AM by Big Ed to hit some tribs in Chautauqua County. I got a text message at the pick up time saying " Good Luck dude . Go without me and I may see you out later. You see Big Ed stayed up late last night and is not a morning person. He is a man of many responsibilities and a new born. So sometimes the multi tasking of family life takes its toll. That's OK big Ed you catch more fish between noon time and dusk than most people catch all day.

So I hopped in the truck and head west. I was at the appointed destination by 7:30 am which always seems late to me because I am usually getting out before first light. I fished the trib that had a fresh run of bullets by its mouth on Friday and to my shock I could NOT muster up a fish.

Yes I know I suck and should sell off all my equipment. I decided to turn it into a run and gun 4 trib tour at that point but my results were no better.

I stopped at the next trib which was greener than the first but was also dropping. The angle of the north wind just hit the mouth of this creek just right and it felt like I was standing in a meat locker for the hour and half I fished there. There were no signs of life so I kept working my way home.
The next trib was low and clear and hardly zero flow going on. I threw on a jig and gently twitched for about and hour and there was no luck to be found. The mouth itself was packed with 10 hardware chucking rubes who brought 5 of their 8 year olds alongwith them. I am all about shaaring the out doors with kids but they wer enot fishing they wer ejust playing in the sand.
Dude teach your kids to fish!
You must have skills if your chucking Cleo's from a lawn chair on a beach dude. that is all I am saying about that.

At that point it was almost noon so I drove by the One Eight and saw the lot filled with cars so I said F'it I am done. I wasn't feeling the mojo in my soul. I left disappointed with the days outing.

I went home and ate the the bachelor's breakfast: cold pizza and took a nap. I woke up around 3 pm and Big Ed called. He just respooled his pin with new line and was weighing if he should sneak out and fish the conditions I informed of or watch the shit ass Sabres play the last game of the season. Big Ed loves the Sabres but we both know they don't deserve to be in the playoffs because they leave their hearts at the locker room door and lose 14 games a season to bottom dwelling teams. Well of course Ed did not go as he was held down by the yoke of afternoon family responsibilities. Once again that is what life is about. Family first. Steelhead second.

Then commander Tom calls and says that he got an afternoon pass from the wife and he will drive by to pick me up. We went back to Chautauqua County until dusk. I couldn't catch a cold today. Zero for me but the Commander used his pink worm skills to the best of his abilities and had 3 0r 4 hits and caught one feisty little girl that leaped into the air and put on a show for Tom. Good for you man! Getting out for a couple does pay off once in a while. 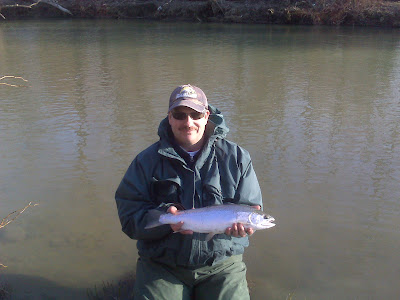 The trib flows are dropping so some of the smaller ones are going to be sucking over the next few days. Keep on the move and look for fish. Don't waste too much time on any one trib unless you get into them.