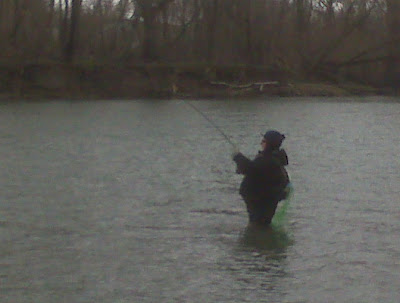 This morning I met Bill Shearer on the Catt at 6 am for a little fishing. We hit one of his spots that had about a foot and a half of visibility after the spike in flow last night. It was still very fishable. I took the top of the run and Bill took the middle to the back of her.

Well of course Bill put on a clinic in the first 4 casts of the day and caught 2 fish. the first one took 5 cart wheel leaps before coming to shore.
I consider it an honor to be schooled by Bill he does it in such a gentlemanly fashion. There is no bragging, no screams , just the smile of a fired up 12 year old on a sugar rush beaming through the half light.

Maybe I need a Kingpin Bill?

Well as hot as it that first 4 casts were, the temperature dropped about 5 degrees instantaneously accompanied by a light rain and a blustery wind. We both knew we were out of business for a while so we went up to the Timmy Ho's for a coffee.

Thanks again for the Girlie Cafe Mocha I requested Bill. I should of took her hot, black , and no sugar after those temps dropped. We spent the next half hour talking fishing and other miscellaneous stuff. At that point Bill decided it was in his best interest to head home north and clear customs to attend to some matters before vacation.

I on the other hand being the steelhead bum I am hit a different part of the creek in hopes of wiping the skunk off me from earlier. I knew it might be hard with the weather being crappy but I tried. I hopped in the water near Jerry and Mike . They are two of the local hardcore regulars that are on the water all the time. They notified me that had some luck earlier and I watched Jerry land a sweet 10lb chrome hen on his secret presentation. While he was doing that I caught 2 fish on a pink worm/ jig presentation but that was the extent of my catching for the day.

Both Jerry and Mike once they recognized me greeted me kindly and gave me scoop on what was working. I continued to watch Jerry catch some fish and when I asked him what his secret was? His partner Mike commented he pees on his jigs. Now that is a nice secret there guys. these two guys bust on each other as bad as some Lake Huron boys I know. Well almost as bad.

These two warriors were some of the limited few successful fisherman I ran into or heard from today. Good on them!

Jerry is the proprietor of Renegade Rods (716) 435-0200. I don't own one nor does Jerry even know I'm plugging him right now. I just appreciate his unsolicited friendliness on of the water.
That is Jerry in the pic hauling in another fish under dark skies.

Drying out the leaky waders and getting ready for tomorrow right now.
Tomorrow is a double header day.
Some alone time in the morning on the Cat for me and a return to her at 4 or 5pm with the commander for some dusk action.