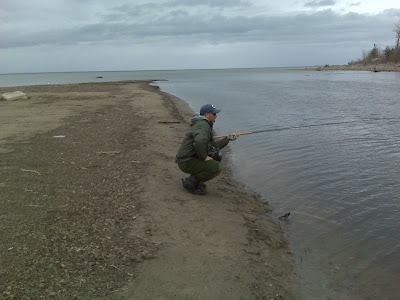 Yes Crouching Tiger Hidden Steelhead. The standard position when your back and legs are aching. When I assume the position I can hear my vertebrae click and my back muscles stretch and relax. It is good to take a load of one's fat arse.
I started off at first light at tribs west of the One Eight. I could hear a few fish jumping in the pool and the water looked a little lighter in color than the day before. I started off where I had success the day before. As they say you go back to the honey hole until there is no honey left. Today was slower than yesterday but there were 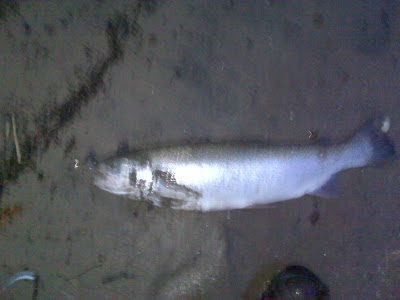 some fish caught.
A wise man once told me maybe you should have zigged when you zagged. mmm........ Your probably right sir.... Your probably right.
On my second cast of a day, my float drops and I raise the IMX to the the sky. The fish leaped and rolled and headed to some mid stream brush in the half light where I lost a float and jig yesterday. This girl gave two great runs burned line out pretty good.
I get her to shore and I started laughing in shock. The girl on her second run into the brush dislodged my lost float and jig from yesterday from the brush. So my jig from today is in her mouth and rapped around her is yesterdays float and jig. That is wacked in my book but I get my float back!
I beach the gal cut off the spare float and line and dislodge the jig from her mouth. I would say this long and skinny gal was in her mid to high twenties. I apologize for the lousy pic. I was dealing with 2 floats, a flopping fish, and half light.
Four more casts later I connect again withe another hard fighting gal in the same size range. These girls must be drop backs I suppose but they were not beat up at all. I had a few more fish on that spit the hook. Then things slowed down. 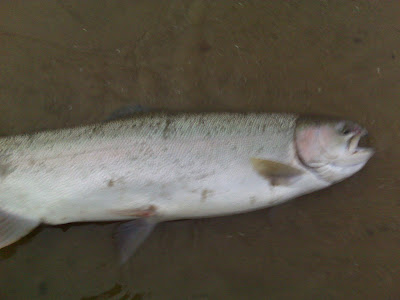 I ran into to Bill Shearer and updated him on the so so action. He went upstream and I decided to try out another trib. The second trib had no action going. The water was a beautiful green but the water had dropped and there was not a quality water levels to the lake. I noticed some badly beat up drop backs slowly swimming out to the lake on the top of the surface like submarines.I hung around for and hour or so, talked to a goose and then made for a quick lunch. 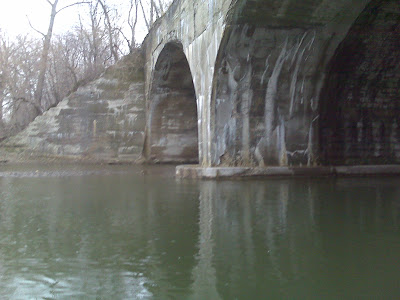 After lunch, I spent the afternoon on the 18. There was a light rain and I got into a few steelhead and about 4 bass to add to the catch. All the steelhead were very small skippers. At 2 pm there was a heavy rain followed by a cold fog that moved in. The estuary started to muck up from the clay run off from the runoff from the homes on the cliff. 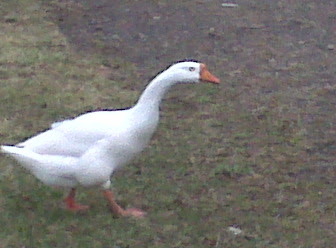 I called it quits at 3:30 pm and at that time the rest of the creek was still low and green. I suppose with tonight's rain tomorrow may be a hit or miss proposition depending on the trib you hit. I'm drying my stuff out as I type away.
Below is a pick of one of Commander Tom's fish from yesterday afternoon when he broke free of a few obligations. 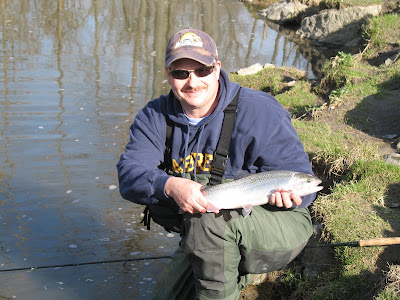