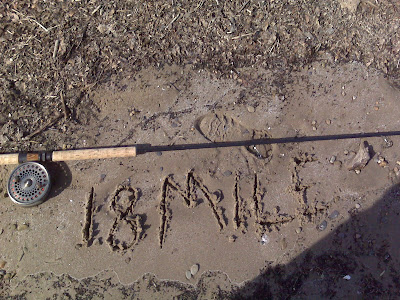 This morning the alarm went off at 5 am and I hit the snooze button. Luckily that only resulted in me getting on the One Eight at 7am instead of 6:30am. I took a walk out to the estuary only to find the pool a murky brown. I double bagged my presentations and gave it a shot for about an hour or so. There was nothing going on today down at the mouth.
I did notice that all this fishing is starting to give the body a beating. The casting arm is getting sore as is the shoulder. The legs felt like concrete blocks today but I endured remembering that countless others would like to be on the water instead of at the office and Commander Tom called me to remind me of that fact. 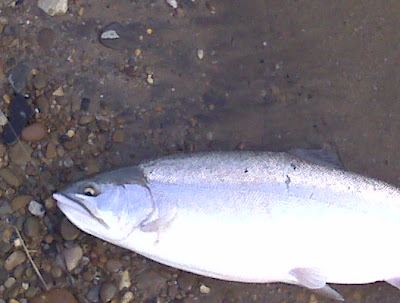 After the hour and a half I walked back toward the access point. My body told me go home and take a nap but the truck drove in a different direction. I pointed my vehicle west figuring I would hit all the creeks and ditches down the lake shore. I stopped at one spot and found a small pod of fish sitting in murky green brown water near the lake. I threw a jig presentations as the cookie cutters love minnows as the move into the warm waters of creek mouths. 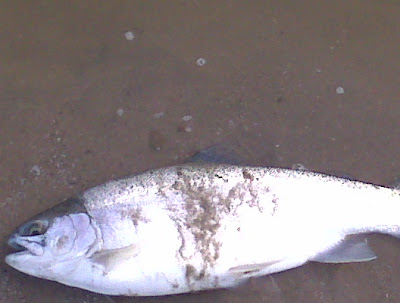 I ended up catching a bunch of small steelhead which were noticeably fat for their size. They were a bunch of chubby little girls filled with spunk and fight. I even caught a 25 inch brown which made the mix interesting. Unfortunately, the brownie rolled and wiggled as I tried to take a picture and escaped back to the water. I called the commader to let him know but honestly Big T I wasn't rubbbing it in!
Everything died down by 1 pm and I called it quits at 1:45pm.
By that time it was 61 degrees and my waders turned into a human crock pot.
Well tonight its time to clean the grit out of the reel. Centerpins and sand don't mix well at times. I also need to take a run and stock up on floro and stuff too.

The mother creek was green in the upper and middle sections when I drove over it this afternoon. So it may have just have been a mix of yesterday's rain and the wave action that temporarily muddied her a bit.

That's all for today.

signing off slightly beat up and broke down.